by Tape Hiss and Sparkle 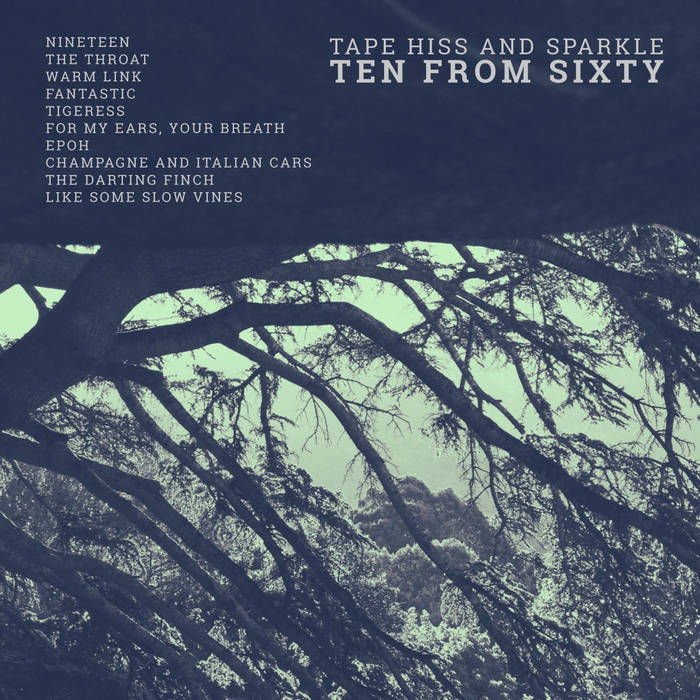 In the middle of 2009, a friend of mine, artist Linda Stupart, invited me - along with many other artists, poets, writers and musicians* - to contribute to her blog, Mixtape. So, I decided to contribute six songs every month to Linda's blog.

Some of Mixtape is now archived on Artheat, and you can still read my first post here: artheat.net/mixtape/2009/07/001-tape-hiss-and-sparkle.htmland. Its great to still read some of those entries, and even more impressive to know that many of these people have grown their practices and are successful now, ten years later.

In 2009, I was the lead vocalist for The Sleepers (I left in 2011) and I was working as a storyboard artist for animation company, Clockwork Zoo. I lived with my partner in a tiny apartment in Rondebosch, Cape Town, South Africa. In March of that year, the Great Recession hit and I lost my job. It goes without saying, that 2008 and the year directly after, was a difficult period for many people all around the world.

The songs that I wrote and recorded in that time were loose, weird, dark, sad, funny and ambitious. I was very aware of my limitations. I had no sound-proof room, no internet, no money, no soundcard, no microphone. Just a guitar, an eMac with a built-in mic, some very rudimentary software and an internet cafe across the road.

Instead of trying to fake my way into professional production - I only had a couple of hours a month to write and record these songs anyway - I decided to lean into the lo-fi feel. That's where the name came from; tape hiss - that shhh sound - and sparkle - an audio term for a pleasant treble in a recording.

Writing six songs every month, was akin to an athletic event, or maybe a songwriting gym. I was exercising muscles that I never knew I had. Even though none of the songs were going to win any awards, there was an immediacy in their creation and an urgency in their raw and weird emotion that excited me.

Ten years later, songwriting has ventured a little further away from my bedroom. Tape Hiss and Sparkle has released four albums, For You In Your Cubicle (2010), The Hidden Year (2011), Paperhawk (2012) and The Winter Switch (2015), the last two being "radio quality".

Tape Hiss and Sparkle has grown into a musical project that I am incredibly proud of. It has expanded from being a solo project, to a full band, and back, numerous times. But it has survived all the ups and downs that so often claim the lives of many musical projects. All past members** are still good friends of mine, and that's the way that I think music should be. It should invigorate listeners and the people who make it. If it doesn't make you feel alive, then you're doing it wrong.

In this album of mixed parts, I've taken one song from each of the ten demo EPs that was released in 2009 and 2010. I've made sure to choose songs that didn't end up on later releases. Each song is a snapshot of one month in a year where so much went wrong, but so much also seemed to fall into place.

Thank you so much for listening. Especially those who listened before,

I sincerely hope you enjoy it.

*It has always made me feel a little giddy to find my name among the other contributors and amazingly talented individuals.

Tape Hiss & Sparkle was started in 2009, by Simon Tamblyn. Currently TH&S is Mandisi Nkomo on drums and percussion with Tamblyn on vocals and guitar.

Bandcamp Daily  your guide to the world of Bandcamp